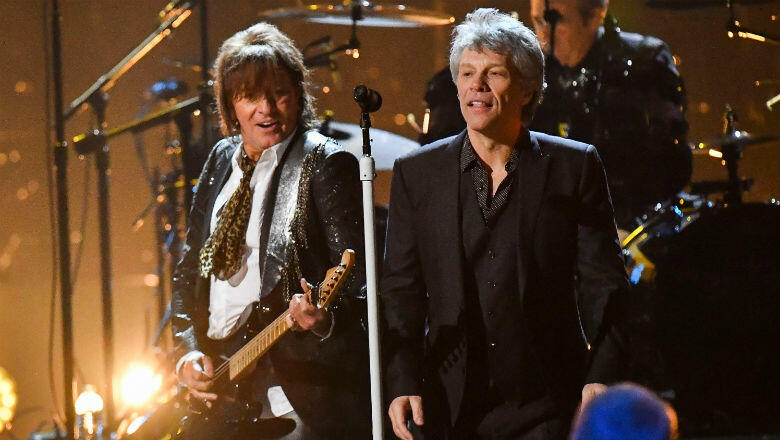 Jon Bon Jovi and Richie Sambora have reunited for the first time in 5 years onstage at the 2018 Rock and Roll Hall of Fame induction ceremony on Saturday, April 14th at Cleveland's Public Auditorium. After being inducted by radio legend Howard Stern, the Bon Jovi performed "You Give Love a Bad Name," "It's My Life," "When We Were Us" and "Livin' on a Prayer." Bon Jovi was inducted into the Rock Hall alongside the Cars, the Moody Blues, and Dire Straits.

It was no secret that Sambora would join the stage with the band for the induction and he announced he would be in attendance after the Class of 2018 was released.  "It's the Rock and Roll Hall of Fame -- it'll be a joyous occasion," Sambora explained. "I was there for 31 years and we sold 150 million records or something, and we put a lot of asses in seats in stadiums around the world and made a lot of people happy. I did so many different jobs in that band, so, yeah, I'm showing up for that. Everybody should have a smile on their face and a smile in their hearts and it should be a celebration of what we did."

Sambora split from the band in 2013 due to "personal issues," but Jon Bon Jovi said he could return at any time. "He was my right hand for a long time," Jon said. "So there was never ill will, just like I told everybody. [He] just didn’t show up anymore. We went on, but he was there for three decades and he should be there to celebrate the moment. So he'll be invited to join the rest of the band in all of the festivities."

Despite being the most commercially successful, Bon Jovi was the first to take the stage at the ceremony. “I’ve been writing this speech since I first strummed the broom and sang at the top of the stairs of my childhood home,” said Jon Bon Jovi during his acceptance speech. He went on to vent his frustration that the band had to wait a decade to be inducted. “I’ve actually written it many ways, many times. Some days I write the 'thank you' speech, other days, I write the 'f**k you' speech.”

Here they perform their classic LIVIN' ON A PRAYER